If we climb the steps situated next to the Town Hall, in Hospital Street, cross de la Bretxa Street and carry on climbing the next section of stairs situated on our left, we'll come across the narrow del Cid Street. Here we only have to look right and our eyes will see the Castle of Dénia.

Two towers are situated on both side of the entrance gate: the Torre Roja, or Red Tower, a defensive tower from the 15th c., owing its name the local reddish sandstone used and the Torre del Cos de Guàrdia, (Guardian Corps Tower) from the Muslim period (12th c.) although very much reformed in the 16th and 17th centuries, used as a lookout by the guardians who were in charge of surveillance of the entrance gate.

This entrance connected the Muslim medina or town with the castle.

Once inside the castle and next to the ticket office we find the Torre del Consell, (Council Tower) from the Christian period (15th c.). The Town's Council met in this tower to organise, debate and take decisions. Although a secondary defensive function is clearly defined by cavities which were used by artillery.

Once we enter the castle the ascent begins. We have two choices: a cobble stone street (on the left) or the road which has been opened.

Once we leave the Castle,we find the second point of visit: Les Roques neighbourhood. 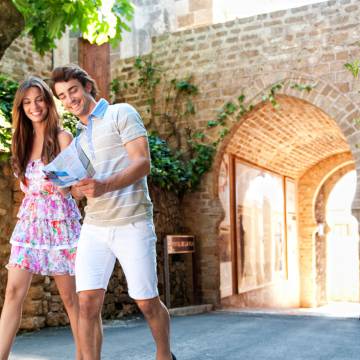