The Santa Paula Chapel of Dénia provides exceptional historical testimony. It was founded on the ruins of a late Andalusian farmhouse (called “rafal” in Arabic) and was built as part of the building complex or monastery.

It is a building with rectangular layout, a single body with three sections separated by two slightly pointed diaphragm arches. The flat head wall with diaphragm arches built with ashlar stonework made with the local sandstone which start from the floor and the interior buttresses. In the documentation works prior to the restoration, an access doorway was discovered in the opening in the northern wall in the first section which undoubtedly belongs to the time of the building’s founding. Nowadays, it is accessed from the west. This lateral access probably had some relation to the circulation and connection to the Monastery building complex, which must have possessed other premises north of the Hermitage nave. Its gable roof was supported on main beams between the arches and on modillions or stone corbels.

Two documents from 1404 certify the reason for the founding of Santa Paula, which they called “esglesia” (church) or “monestir” (monastery), as well as its construction with Caterina Bas as the main authority and founder, whose Hermitage was built thanks to her efforts. It was originally a women’s convent founded by this hermit nun. As a Hermitage, it benefited from good incomes and a salaried priest.

Its holiday is celebrated every 26th of January in the Hermitage which dedicates songs and processions to this saint. We can also purchase nuts and typical sweets from the area.

It is located west of the city in the starting point: Vessanes.

We start our route from the Plaza Jaime I. First, find the street: calle Germans Maristes, where on the right, we can see a tall grey building with dark windows (Juzgados or Dénia Courthouse Building). We continue down this street where we pass an outdoor municipal car park on the right. We enter the road: Camí del Saladar and travel approx. 500 m. until we reach the junction where we will take the exit on the left to a road called Camí de Santa Paula – as reference, we can see some signs for a bike route. We continue approx. 100 m on the right without leaving the paved road. After zigzagging about 900 m, we come to a road on the right which leads directly to the Hermitage. As reference, we find a the metal post of a high voltage power line on our left and the entrance to the Hermitage is right in front. 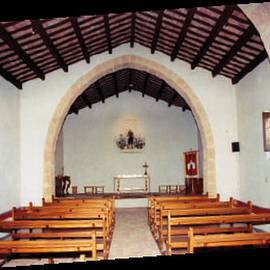