This is Dénia’s main street, a street which reflects the city’s dynamic and bustling nature.

This street concentrates a many of the city’s major banks, shops, cafes and restaurants. The street is closed to traffic on weekends to allow citizens and tourists to freely stroll this avenue, under the banana trees located on both sides which lend it a special charm.

It is also popularly known as the “Calle Campos” since it hosts the majority of the major events which are celebrated in Dénia: the famous “entrà” (entry) of the “bous a la mar” (bulls in the sea)- an interesting national holiday for tourists – is held on this street, the carriages (an interesting provincial holiday for tourists celebrated during their main holiday, the “festa major”) as well as the colourful gala parades of the Christian and Moor associations, the health and natural foods fair, the toy fair, etc.

The Calle Marqués de Campo is one of the city avenues that markedly defined the layout of Dénia’s modern city, especially during the end of the 19th Century and the early 20th Century. It also represents the main axis known in Dénia as the city’s “extramuros” expansion (outside the fortified walls) following the demolition of its city walls, which allowed the city to expand its boundaries beyond the Medieval wall and grow in a North-South direction. This partially due to the fact that a barrier was created in the south by the old railway route to Carcaixent and also because the urban development dynamic wished to connect this zone to the sea, a fact which they did not manage to achieve until the beginning of the 20th   Century.

The Main Theatre (Teatro Principal) was located on this street in 1869 but it no longer exists today.

The calle Marqués de Campo was developed in 2 phases: the first alignments and works were initiated in 1880 and the Hotel El Comercio was inaugurated in 1890, consolidating the first section between the following streets: Carlos Sentí and Diana. In the western section, we find the best examples of the period’s housing with their uniform architectural style.

The aperture of the 2nd section which led to the sea was halted due to the existence of 3 warehouses, hence it was not connected to the sea until 1917.

In the calle Campos, we highlight among other representative models from the 19th Century, the building located at nº 17, the old Hotel el Comercio (it is a now a restaurant),  whose façade is decorated with original ceramic tiles from Portugal with multi-coloured geometric motifs as well as the building at nº 7 which forms the corner with the building nº 11 of calle Diana, which is in excellent conservation condition; it was built between 1873 and 1900 in addition to various subsequent remodelling works. 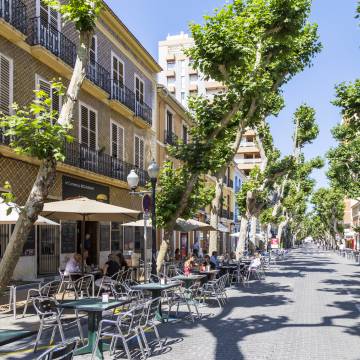