In front of the Tourist Office we'll find a part of Dénia's commercial port, with ferries transporting voyagers and goods from Dénia to the Balearic Islands since Dénia is the nearest continental point to the island of Eivissa, only 55 miles away.

Going north we'll find the fishers' nets on the port displaying one of Dénia's most traditional activities: fishing.

In front of the Old Fish Market we can see "golondrina" motor boats and catamarans carrying out regular coastal excursions.

At the end of the Cervantes Esplanade we can observe, just in front, the Monument to Climate, which reminds us of Dénia's privileged weather conditions with a yearly 20º C average. The vegetation around it slightly hides it but, if we look carefully, we'll see the image of a woman symbolising weather.

After the Monument to Climate, the building of the old shipyards les Drassanes calls our attention although it actually houses a four-star hotel. This building is of great historical value since these are the shipyards dating from the 16th c. although later reforms were carried out in the 18th c.

We can see the fishing boats arriving to port near the Fish Market (POSIT), how they throw ice in the fish and how they unload it and, later on, how the auction takes place around 16.30 h . It can all be followed from the wide windows in the first floor. Furthermore, we can also buy fish from 17.00 h until 20.00 h aprox.

Each year, there is a one month biological halt, meaning that auctions on those dates will only be captures from the traditional tresmall craft variety, which do not have a biological halt period, as well as fish coming from other fishing brotherhoods. Auctions take place at 14.00 h, instead of 17.00 h, and the sale will continue to take place at 17.00 h.

The fishing port of Dénia is of great importance due to the great quality and variety of the fish reaching the port.

After the new Fish Market we find some wharves with leisure boats. It's the local port. This port has 501 moorings for boats of a maximum 8 m. length.

Further to this small port, Dénia has 2 bigger sport ports, which give berth to boats of greater length: the Yacht Club gives shelter to boats up to 20 m. long and the Marina de Dénia, with a capacity for boats up to 60 m. long. Both are situated in another area, towards Les Rotes, to the south of the city.

On the opossite side of the small local sports' port is El Raset area with terraces, restaurants and shops.

Spring and summer open air market is situated along the maritim esplanade in front of the local port, from 6 pm to midnight (until 1 am in summer and festivities eves). Sale stalls with a bohemian and handicraft atmosphere where you can find a great variety of products: imitation jewellery, leather goods, paintings, etc.

In the middle, between the drive and El Raset we can see several sculptures, an example is the sculpture known as Bous a la Mar (Bulls to the sea) commemorating one of the most representative and traditional fiestas in Dénia, declared of National Tourist Interest, held during the first fortnight of July. Furthermore, we can also see the monument to the Anchor, with an anchor found in Dénia's waters, homage to Denia's great fishing tradition.

The low rise houses in this area call our attention. It is here you'll find the quarter known as Baix la mar (down by the sea), the fishermen's quarter. This quarter is one of the oldest in town and we must point out both the low rise houses and the narrow streets with small squares such as: Plaça de Sant Antoni (St. Anthony's Square), or the well known Placeta de la Creu (Small Square of the Cross), where you will find a cross right in the middle of the square.

After strolling around this quarter we'll go back to the local port and our walk will continue towards El Portet and the Maritime Station: from the local port, we will see a promenade that leads to El Portet (marina) and the Maritime Station (Balearia ferries to the Balearic Islands), both located on the northern pier. In this area you will find nautical sports, leisure and restaurants as well as spectacular views of the castle and surroundings. 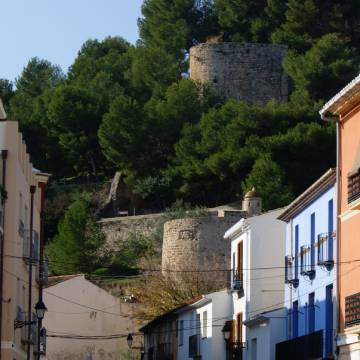