Around the Christian towns immersed in rural areas in the boundaries with forests, woods, and even desert areas at that age, during the 14th-15th Centuries –the age of the Christian Conquest- Hermitages were built with similar architectural features. There are single nave buildings with or without lateral chapels, wood beamed ceilings and double slope roof. Flat headwall with beamed ceiling supported by pointed diaphragm arches. Their presence is recorded throughout the entire Valencian territory. The locally known Santa Llúcia Hermitage is a clear example of the “Conquista” hermitages due to its site and its architectural features. This religious building dates from the 15th Century which was subsequently remodelled in the years: 1708-1812. It is a single nave building with rectangular layout and its interior is elegantly divided into two sections by a central pointed arch formed by ashlar stonework and coarse stone vaults, which are commonly found in the construction of the buildings in that age. Its structural reinforcement is reflected in the exterior buttresses joined to the walls built with the stone masonry technique. In relation to its main façade, note the access doorway formed by a semi-circular arch with ashlar stonework and vaults. Crowning the façade, we can see a steeple from a later time period. The Hermitage interior has been extensively remodelled and the image of Santa Llúcia is quite recent. The oldest historical treasure that has been conserved is a chalice that dates back to the mid 17th Century whose base portrays an image of Santa Llúcia.

It is located in the starting point of Santa Llúcia and it is accessed by the Camí de Sant Joan.

We start our route from the Tourist Office. We may travel towards the port until we reach the roundabout; at this point, we turn right onto the Dénia Motorway in the direction of Jávea (Las Rotas). We follow this motorway without leaving it until we reach another roundabout which we pass and continue straight in the same direction. On our left, we pass the Royal Yacht Club (Real Club Náutico) of Dénia and continue on to the third roundabout where we can see a hotel in front. At this point, we take the road on the right as we follow Camí d’Aranda. We arrive at a junction where we must take the road on the left called by the name of Camí Alt de Dénia-Xàbia; we travel approx. 50m. and we take right to continue on the Camí d’Aranda. We continue towards Mt. Montgó without leaving the path, always in an upward direction. We arrive at the Camino de Santa Llúcia and must follow it, on the right, we pass the school: Colegio Sagrado Corazón (with its blue façade), until we reach the Camí de L’Ermita de Santa Llúcia on our left. As reference, we must look for the sign which leads us to the School: Colegio Alfa y Omega; we take this road which ends at the Hermitage. The surroundings of this Hermitage are very pleasant and peaceful woods. They invite hikers to relax and let the time pass as they enjoy every moment of nature. 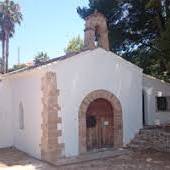 The hermitage is closed all year round, except the Saint Lucia celebration day.