In reference to the Convent, it appears to have been built on what was formerly the Hermitage: Madre de los Desamparados, locally known as "Mare de Déu dels Desemparats" (Virgin Mary of the Homeless). Today only the Convent remains after the destruction caused by the Spanish Civil War, one part of the cloister which surrounded the patio built with sandstone and stone masonry, as well as the exterior façade covered with ashlar stonework, which given the greater resistance of these materials are the best conserved ruins at the present time. The cloister ruins have two front walls of the 2 floors which comprised it; especially noteworthy is the ground floor with 4 elegant semi-circular arches framed by pilasters with Tuscany capitals. Also of note, there is the remains of an entablature with a frieze, corbels, and one cornice which extends, above which there are elegant rectangular windows separated by pilasters. The ground floor had a vaulted section. It seems that there were fresco paintings which decorated the lunette windows of the round cloister with passages from the life of St. Francis (San Francisco).

The façade is of Doric order with a venerated niche containing a modern sculpture of Saint Anthony of Padova. This church has a Latin cross plan, inscribed in a rectangle, with a nave and 8 aisle chapels. The elevation is set with Doric order pilasters on pedestals. Inside the church, we must point out a great enamelled cross with Bible scenes presiding over the high altar. It was sculpted in 1990 by the German silver/goldsmith Egino Weiner, an artist who has exhibits of various works in the Vatican museum. The belfry tower on the left of the Church forms part of the façade from which the bells extend which show stonemasonry pilasters with a Doric capital with four semi-circular arches.

Its present day state is due to remodelling carried out in the 18th century. 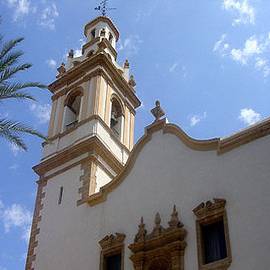 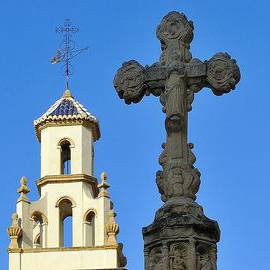