It shows a balanced façade with 6 solid half pointed arches as well as large windows in the two upper floors.

The fact of being on top of a grandstand ennobles it and stands out from the rest of the buildings.

Two Roman inscriptions, proceeding from the forum of Dianium, can be read on the façade at the access stairways in Hospital Street.

Although its origin dates back to the 17th C. the building we see today is the result of an extensive refurbishment in the early 19th Century between 1812 and 1848, which is evident in the architectural structure as well as in the building elements which defines it.

Other remodelling works took place between 1873 and 1900, although the most noticeable was the construction of a small limestone belfry which crowns the building and houses the clock tower. See the main façade, reinforced with coarse stone blocks.

In one of the 3 floors, we find 6 semi-circular arches with sturdy pillars creating a support at the 1 st level.

It is also relevant the inlaid Roman inscription in the middle of the main façade, as well as another inscription located in the building section which faces the Calle Hospital, both belonging to the Forum of Dianium, as well two Roman pedestals in the access to that street. 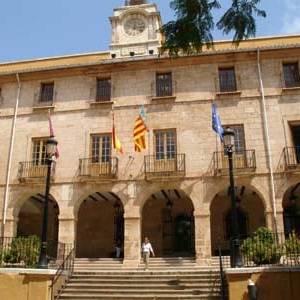 The town hall is an accessible building (access ramp and elevator).